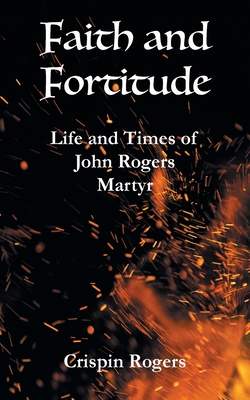 The life story of John Rogers, first of the Protestant Martyrs under Queen Mary and editor of the first authorised English Bible; told as if in his own words, from a newly 'discovered' secret manuscript hidden in the walls of Newgate Prison. This historical fiction is based on a core of extraordinary historical fact, enlivened and elucidated by plausible fiction from the Martyr's twelve times great grandson.

The story spans John Rogers' early, formative life in Deritend and exhilarating time at Cambridge, where the future leading lights of the English Reformation were gathered and famously congregated in The White Horse pub, otherwise known as 'Little Germany' in reference to the seat of European Reformation. On to Oxford and then, following several seminal experiences, into the Catholic Church, leading one of the London churches under the shadow of St Paul's.

Circumstances and his conscience lead him then to Antwerp, where he encounters and is forever influenced by the Bible translator William Tyndale. Evangelical conversion follows for Rogers and after Tyndale's execution, it is Rogers who completes the Thomas Matthew Bible, the first authorised English Bible in the reign of Henry VIII.

In Antwerp he also meets and marries the love of his life, Adriana - who becomes his lifelong companion and counsel and with whom he has eleven children. With Adriana he moves to the very heart of Reformation, Wittenberg, where he meets and befriends Philip Melanchthon, confidant to Martin Luther himself.

A pastoral role in the Lutheran Church in Meldorf follows, where Rogers faces the challenge of taking on a congregation that had lynched their previous minister in a drunken riot. Meanwhile King Henry VIII's death heralds the ascension of his son King Edward VI, whose predisposition toward Protestantism under the influence of his reformist Council drives reformist policies forward.

Rogers at last considers it safe to return to his homeland and is rewarded with the livings of St Sepulchre's in London and a Prebendary at St Paul's. Halcyon days for the reformists, but reversal follows on King Edward's untimely demise and the ascension to the contested throne of his sister, the Catholic Queen Mary.

Called upon to preach at St Paul's Cross in these tumultuous and dangerous times, Rogers first adopts a cautious approach, adhering closely to uncontested aspects of the Gospel. But when called upon to do so again, just three weeks later, he senses his destiny and preaches boldly and bravely against what he sees as the errors, inequities and evils of the Papist Catholic Church at the time. Inevitably this leads to his arrest, initially house arrest, but subsequently imprisonment in the infamous Newgate Prison.

Once the Privy Council has had reinstated the medieval Act directing the burning of heretics, Rogers is finally summoned before them to answer for his beliefs. Unwilling to betray his faith, he remains resolute under examination and is thus excommunicated and passed over to the civil authorities for sentencing to death by burning. His final day arrives and he goes boldly to meet his end - meeting his wife and eleven children, the last of whom he sees for the first and only time, on this his last walk as he passes St Sepulchre's on the way to Smithfield.

Resolute to the last in his beliefs, Rogers shows extraordinary bravery in meeting his end, washing his hands in the flames and praising the Lord to his last breath whilst the watching crowd celebrate his faith and fortitude.

His life, work and death will have lasting impact on the future of Reformation and Protestantism in England and the world for centuries to come.