Briarhill to Brooklyn: An Irish Family's Journey to Freedom and Opportunity (Hardcover) 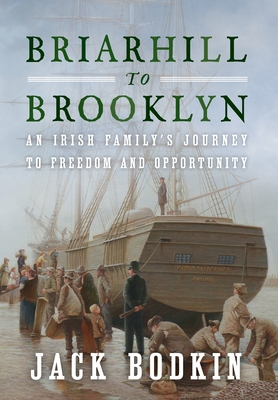 Briarhill to Brooklyn: An Irish Family's Journey to Freedom and Opportunity (Hardcover)

Was it the prospect of starvation, the snows of Black '47, or the fear of typhus that made the Bodkins leave? Or was it the dream of America's freedom and opportunity that drove the family from Galway onto an Irish coffin ship known as Cushlamachree?

Their destination was Brooklyn.

An unimaginable hurdle confronted the seven young Bodkin siblings, only days after docking in New York. Would the "fever" get them, too? But they managed to survive into adulthood as they were led by their two oldest brothers-Dominic and Martin.

Dominic, a fledgling surgeon on the Alabama battlefields of Spanish Fort and Fort Blakely, spends thirty-five years delivering and caring for thousands of Brooklyn babies. Martin, a Civil War veteran, and later an ironmonger with his own shop, ultimately is the progenitor of a large family of New York Bodkins.

Briarhill to Brooklyn is a novel, grounded in facts, in which Jack Bodkin tells the story of his Irish Catholic family's 1848 migration from County Galway, Ireland, to Brooklyn, New York, in the era of the Irish Potato Famine.