Signing Their Rights Away: The Fame and Misfortune of the Men Who Signed the United States Constitution (Paperback) 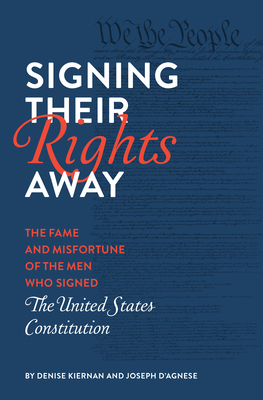 Signing Their Rights Away: The Fame and Misfortune of the Men Who Signed the United States Constitution (Paperback)


On Our Shelves Now
An entertaining and essential collection of stories about the surprising and strange fates of the thirty-nine statesmen who created the U.S. Constitution.

Remember when our elected officials knew how to compromise? Here are short, irreverent, fun, and fact-filled biographies of the 39 men who set aside their differences and signed their names to the U.S. Constitution—the oldest written constitution of any nation in the world. You’ll meet:

Complete with portraits of every signatory, Signing Their Rights Away provides an entertaining and enlightening narrative for students, history buffs, politicos, and Hamilton fans alike.
Denise Kiernan is a journalist, producer, and the New York Times best-selling author of the narrative nonfiction books, The Last Castle and The Girls of Atomic City. Joseph D’Agnese is a journalist, author and ghostwriter who has written for both adults and children. With his wife, Denise Kiernan, he has authored several books on U.S. history, including Signing Their Lives Away, Signing Their Rights Away, and Stuff Every American Should Know. They live in North Carolina.

“[The authors]...maintain a refreshing reverence for the Constitution itself. Rather than ask readers to believe that an ‘assembly of demigods’ (Jefferson's words) wrote the Constitution, Ms. Kiernan and Mr. D’Agnese challenge the notion that the group that crafted this document of enduring genius was uniquely brilliant or visionary. If this raises the question of how exactly the miracle was accomplished, it should at least give readers some hope for our own seemingly uninspired political era.” —The Wall Street Journal

“This is both educational and entertaining.”—Booklist

“Kiernan and D'Agnese, who also wrote Signing their Lives Away, have provided another volume that should appeal to all political and history buffs.”—McClatchy Newspapers

“This little book is entertaining, easy to read, and above all, informative. It’s a brilliant piece of work and a must-have for any history-buff’s library...”—PoliticusUSA

“It’s no secret that I love reading history and occasionally a book comes along that provides an unusual insight beyond the standard telling of a given event. Signing Their Rights Away....is a truly fascinating story that puts their achievement in perspective.”—Bookviews

“Kiernan and D’Agnese make both this period and the men who pulled off this incredible achievement exciting and entertaining...This is exceptional historical reporting that is informative, enlightening, and accessible. Anyone with even a remote interest in our rich national history should purchase this highly recommended book.”—Larry Cox, King Features Syndicate