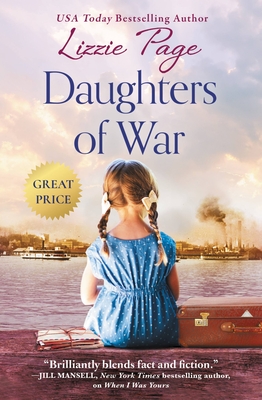 
On Our Shelves Now
USA Today bestselling author Lizzie Page delivers a gripping historical drama about a mother fighting for her daughters and her country in the midst of a World War, perfect for fans of Natasha Lester and Shirley Dickson.  As a teenager in Chicago, May always dreamed of traveling the world. So when she falls in love with George Turner, she can't wait to return to London as his wife. Two beautiful daughters follow, but George isn't the husband he promised to be. Ten years on, May is wondering if she's made a terrible mistake. The Great War has been declared in Europe, and all around, brave young men are being called up to serve. George, banned from conscription himself, has taken to the bottle, and May suspects he's seeing other women too. He even sends her beloved daughters away to school. She misses them terribly every day. But then May meets veteran nurse Elsie, who persuades her to join the war effort. May knows nothing of nursing -- it will be difficult, dangerous work, but her heart is telling her it's the right thing to do and the only way to carve out a life for herself and her daughters away from George. But when George does the unthinkable, May's children are put at risk. Miles away on the front line and unable to reach them, will May be reunited with her little girls before it's too late?
Lizzie Page lives in a seaside town in Essex, England where she grew up. After studying politics at University, she worked as an English teacher, first in Paris and then in Tokyo, for five years. Back in England, she tried and failed various jobs, before enjoying studying a masters in creative writing at Goldsmiths College. Lizzie loves reading historical and modern fiction, watching films, and travelling. Her husband Steve, three lovely children, and Lenny the cockapoo all conspire to stop her writing!

“This easy read is full of drama and love and is perfect for fans of heartwarming stories and happily ever afters.”—Booklist

"This is a book to savor... A poignant, absolutely stunning tale."—Renita D'Silva, author of The Girl in the Painting

"A perfect read and a perfect tribute to the wonderful women who did their duty as War Nurses."—Stardust Book Reviews