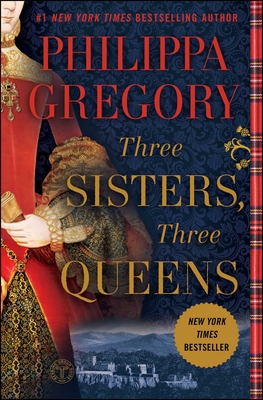 From #1 New York Times bestselling author Philippa Gregory, the little-known story of three Tudor women who are united in sisterhood and yet compelled to be rivals when they fulfill their destinies as queens.

As sisters they share an everlasting bond; as queens they can break each other’s hearts…

When Katherine of Aragon is brought to the Tudor court as a young bride, the oldest princess, Margaret, takes her measure. With one look, each knows the other for a rival, an ally, a pawn, destined—with Margaret’s younger sister Mary—to a unique sisterhood. The three sisters will become the queens of England, Scotland, and France.

United by family loyalties and affections, the three queens find themselves set against each other. Katherine commands an army against Margaret and kills her husband James IV of Scotland. But Margaret’s boy becomes heir to the Tudor throne when Katherine loses her son.

Mary steals the widowed Margaret’s proposed husband, but when Mary is widowed it is her secret marriage for love that is the envy of the others. As they experience betrayals, dangers, loss, and passion, the three sisters find that the only constant in their perilous lives is their special bond, more powerful than any man, even a king.
Philippa Gregory is the author of many New York Times bestselling novels, including The Other Boleyn Girl, and is a recognized authority on women’s history. Many of her works have been adapted for the screen including The Other Boleyn Girl. She graduated from the University of Sussex and received a PhD from the University of Edinburgh, where she is a Regent. She holds honorary degrees from Teesside University and the University of Sussex. She is a fellow of the Universities of Sussex and Cardiff and was awarded the 2016 Harrogate Festival Award for Contribution to Historical Fiction. She is an honorary research fellow at Birkbeck, University of London. She was awarded a CBE title for services to literature and charity in 2022. She welcomes visitors to her website PhilippaGregory.com.

"Nobody shines a light on the women of Tudor history like Philippa Gregory… Meticulously researched and deeply entertaining, this story of betrayal and divided loyalties is Gregory on top form."
— Good Housekeeping (UK)

"Mesmerizing, intimate...Gregory defines what it means to be a writer of historical fiction. She lures readers straight into the hearts and minds of her characters by masterful storytelling and brilliant reimagination blended with historical fact. She brings history to life."
— RT Book Reviews

"A fictional tale as steeped in history as it is in intrigue and family dysfunction....Gregory excels in plucking real-life women out of their secondary places in the historical chorus and placing them stage center in starring roles."
— Booklist