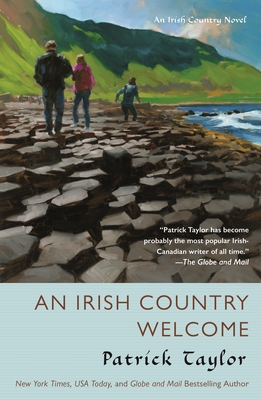 This is book number 15 in the Irish Country Books series.

In the close-knit Northern Irish village of Ballybucklebo, it’s said that a new baby brings its own welcome. Young doctor Barry Laverty and his wife Sue are anxiously awaiting their first child, but as the community itself prepares to welcome a new decade, the closing months of the 1960s bring more than a televised moon landing to Barry, his friends, his neighbors, and his patients, including a number of sticky questions.

A fledgling doctor joins the practice as a trainee, but will the very upper-class Sebastian Carson be a good fit for the rough and tumble of Irish country life? And as sectarian tensions rise elsewhere in Ulster, can a Protestant man marry the Catholic woman he dearly loves, despite his father’s opposition? And who exactly is going to win the award for the best dandelion wine at this year’s Harvest Festival?

But while Barry and Dr. Fingal Flahertie O’Reilly and their fellow physicians deal with everything from brain surgery to a tractor accident to a difficult pregnancy, there’s still time to share the comforting joys and pleasures of this very special place: fly-fishing, boat races, and even the town’s very first talent competition!

Welcome back to Ballybucklebo, as vividly brought to life by a master storyteller.

“Heartwarming…the stories, shenanigans, and essential goodness of the doctors and townspeople continue to provide a welcome balm for their souls, and, in these tough times, for ours.”—Booklist

“While Ballybucklebo does have its share of trials, Taylor steers his characters and readers through rocky waters with a steady hand. This visit to Taylor's Ireland is, like its predecessors, a delight.”—Shelf Awareness