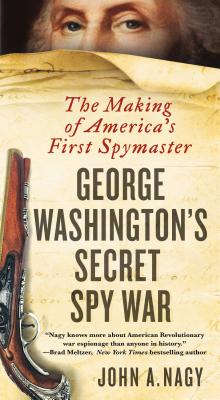 By John A. Nagy

George Washington was America’s first spymaster, and his skill as such won the war for independence.

George Washington’s Secret Spy War is the untold story of how George Washington took a disorderly, ill-equipped rabble and defeated the best trained and best equipped army of its day in the Revolutionary War. Author John A. Nagy has become the nation’s leading expert on the subject, discovering hundreds of spies who went behind enemy lines to gather intelligence during the American Revolution, many of whom are completely unknown to most historians.

Using George Washington’s diary as the primary source, Nagy tells the story of Washington’s experiences during the French and Indian War and his first steps in the field of espionage. Despite what many believe, Washington did not come to the American Revolution completely unskilled in this area of warfare. Espionage was a skill he honed during the French and Indian war and upon which he heavily depended during the Revolutionary War. He used espionage to level the playing field and then exploited it on to final victory.

Filled with thrilling and never-before-told stories from the battlefield and behind enemy lines, this is the story of how Washington out-spied the British. For the first time, readers will discover how espionage played a major part in the American Revolution and why Washington was a master at orchestrating it.

JOHN A. NAGY was a Scholar-in-Residence at Saint Francis University and a consultant on espionage to The Fred W. Smith National Library for the Study of George Washington and the William L. Clement Library. He was the program director for the American Revolution Round Table of Philadelphia and was awarded a Robert H. Smith International Center for Jefferson Studies fellowship to study Thomas Jefferson and cryptology. John was an award-winning author of four books on the American Revolution. He passed away in 2016 after completing George Washington's Secret Spy War.

"One intriguing, little-known facet of the first general of the Continental Army: his wholehearted embrace of the art of deception against the British. A cryptology specialist of the Colonial period, Nagy, who died this year, found that the Founding Father famed for his inability to tell a lie actually embarked on wartime espionage 'with childlike glee.' . . . A knowledgeable study of Washington's extensive 'bag of tricks' to secure victory." —Kirkus Reviews

"John A. Nagy, the premier historian of espionage in the Revolution, has written his masterpiece. Readers will be dazzled by the revelations, which range from the siege of Boston, where spies operated as fishermen with a permit from a British admiral as cover, to Yorktown's "Deception Battle Plan." Best of all we learn how and where young Washington learned the art and science of the deadly game. A must for everyone's library." —Thomas Fleming, author of The Great Divide: The Conflict Between Washington and Jefferson that Defined a Nation

“Based on deep archival research and an unrivalled knowledge of spy networks in the American Revolution, John Nagy has uncovered a neglected dimension of the leadership of George Washington as a master of deception and the creator of a highly effective espionage system against the British. Nagy makes the case that he did not have as many spies as his opponents but that his success was due to his abilities to select and interpret evidence. This is an important work both for specialists and lay readers." —Andrew O'Shaughnessy, author of The Men Who Lost America, and Professor of History, University of Virginia