When It Was Grand: The Radical Republican History of the Civil War (Hardcover) 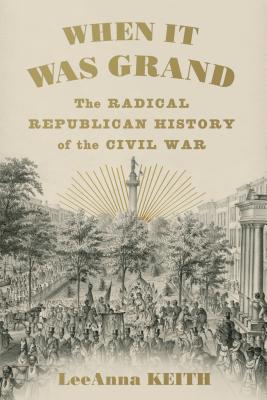 When It Was Grand: The Radical Republican History of the Civil War (Hardcover)

Garrison’s simple statement expresses the essential truths at the heart of LeeAnna Keith’s When It Was Grand. Here is the full story, dramatically told, of the Radical Republicans—the champions of abolition who helped found a new political party and turn it toward the extirpation of slavery. Keith introduces us to the idealistic Massachusetts preachers and philanthropists, rugged Midwestern politicians, and African American activists who collaborated to protect escaped slaves from their captors, to create and defend black military regiments and win the contest for the soul of their party. Keith’s fast-paced, deeply researched narrative gives us new perspective on figures ranging from Ralph Waldo Emerson and John Brown, to the gruff antislavery general John Fremont and his astute wife, Jessie Benton Fremont, and the radicals’ sometime critic and sometime partner Abraham Lincoln.

In the 1850s and 1860s, a powerful faction of the Republican Party stood for a demanding ideal of racial justice—and insisted that their party and nation live up to it. Here is a colorful, definitive account of their indelible accomplishment.

LeeAnna Keith teaches history at the Collegiate School for Boys in New York City. She is the author of The Colfax Massacre: The Untold Story of Black Power, White Terror, and the Death of Reconstruction.

"[A] well-researched, densely detailed account . . . A deep scholarly look into a time when radicals in the Republican Party planted the roots for the civil rights movement." —Kirkus Reviews

"Keith writes at length and with eloquence about the role of black abolitionists in pressing for emancipation before and during the war . . . [A] gripping accounts of partisanship, political ambition, civil disobedience, and the creative ways that radicals used print and speech to persuade Americans to understand and accept the necessity of emancipation and the importance of equal rights." —Randall M. Miller, Library Journal

"Lincoln’s combination of cautiousness and radicalism is aptly described by LeeAnna Keith, who writes of 'Lincoln’s outwardly conservative campaign to build a consensus around military emancipation' . . . Yet very similar impulses, she shows, had been previously acted on by brave antislavery reformers, without whom the crucial moment would never have been brought about . . . [When It Was Grand] covers militants who have never been juxtaposed before." —David S. Reynolds, The Wall Street Journal

"the Radical Republicans have always been the most colorful of the party’s factions to chronicle. They have enjoyed both outstanding group histories and individual biographies. And with LeeAnna Keith’s new When It Was Grand, we are presented with a bridge built from the Radical Republicans of the Civil War era to modern progressives in the 21st century." —Allen C. Guelzo, The Civil War Monitor

“This timely and highly readable book gives us a concise history of the Republican party when it was the party of Lincoln and antislavery. LeeAnna Keith shows that abolitionists and the Radical Republicans, far from being extremists, were seers of an interracial democracy in the United States who would be dismayed at the state of the party they founded today.” —Manisha Sinha, author of The Slave's Cause: A History of Abolition