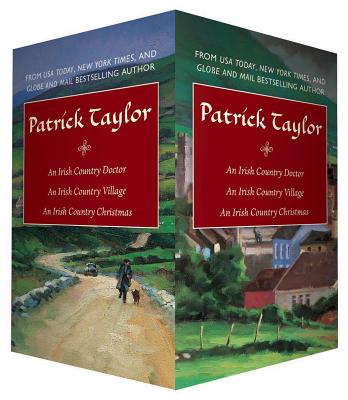 Patrick Taylor's Irish Country novels captivate from the very first page—and leave you yearning to visit the Irish countryside of days gone by.

Welcome to Ballybucklebo, the colourful Northern Ireland community that is home to Dr. Fingal Flahertie O'Reilly, his young assistant, Dr. Barry Laverty, and a host of other endearing and eccentric characters who make every day an experience.

Contained in this beautiful boxed set:

Barry Laverty, M.B., can barely find the village of Ballybucklebo on the map when he first sets out to seek employment there. But Barry jumps at the chance to secure a position as an assistant in a small rural practice—that is until he meets is boss, Dr. Fingal Flahertie O'Reilly.

Dr. Barry Laverty has only just begun his assistantship under the eccentric Dr. O'Reilly when the sudden death of a patient casts a cloud over Barry's reputation. While he anxiously waits for the postmortem results, Barry must regain the trust of the village one patient at a time.

Dr. Barry Laverty is looking forward to his first Christmas in Ballybucklebo, until he learns that his sweetheart, Patricia, might not be coming home for the holiday. But the young doctor has little time to dwell on romantic disappointments.