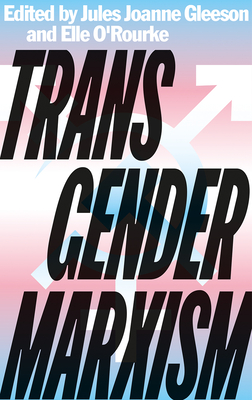 
On Our Shelves Now
“A terrific collection of essays - I couldn't put it down”—Kathi Weeks, author, The Problem with Work

“A vibrant and much needed collection - not just for trans people - but the left in general”—Shon Faye, author, The Transgender Issue

The first collection of its kind, Transgender Marxism is a provocative and groundbreaking union of transgender studies and Marxist theory.

Exploring trans lives and movements, the authors delve into the experience of surviving as transgender under capitalism. They explore the pressures, oppression and state persecution faced by trans people living in capitalist societies, their tenuous positions in the workplace and the home, and give a powerful response to right-wing scaremongering against “gender ideology'.” Chapters include:

*Trans Work: Employment Trajectories, Labour Discipline and Gender Freedom by Michelle O'Brien
*Judith Butler's Scientific Revolution: Foundations for a Transsexual Marxism by Rosa Lee
*How Do Gender Transitions Happen? By Jules Joanne Gleeson
*A Queer Marxist Transfeminism: Queer and Trans Social Reproduction by Nat Raha
*The Bridge between Gender and Organizing by Farah Thompson
*Transgender and Disabled Bodies - Between Pain and the Imaginary by Zoe Belinsky
*Seizing the Means: Towards a Trans Epistemology by Nathaniel Dickson
*”Why Are We Like This?” The Primacy of Transsexuality by Xandra Metcalfe
*Cosmos Against Nature in the Class Struggle of Proletarian Trans Women by Anja Heisler Weiser Flower
*Afterword: One Utopia, One Dystopia by Jordy Rosenberg

Reflecting on the relations between gender and labor, these essays reveal the structure of antagonisms faced by gender non-conforming people within society. Looking at the history of transgender movements, Marxist interventions into developmental theory, psychoanalysis and workplace ethnography, the authors conclude that for trans liberation, capitalism must be abolished.
Jules Joanne Gleeson is a writer, comedian and historian. She has published essays in outlets including Viewpoint Magazine, Invert Journal and VICE, and performed internationally at a wide range of communist and queer cultural events.

Elle O'Rourke is a political economist and gender theorist currently researching critical theories of financialisation. She is co-founder of New Socialist, a magazine of left thought and commentary, where she serves as economics co-editor.

Jordy Rosenberg is the author of the acclaimed novel Confessions of the Fox (Atlantic Books, 2019).

'A terrific collection of essays - I couldn't put it down'
Kathi Weeks, author of 'The Problem with Work' (Duke UP, 2011)

'A vibrant and much needed collection - not just for trans people - but the left in general'
Shon Faye, author of 'The Transgender Issue' (Penguin, 2021)


'Stunning ... trans becomes in these pages the vibrant event of a historical materialism from below, intimate and urgent'
Jules Gill-Peterson, author of 'Histories of the Transgender Child' (University of Minnesota Press, 2018)

'Brilliant, thoughtfully researched, and compelling. An immense contribution to the trans liberation struggle and to trans studies scholarship'
Dean Spade, Associate Professor of Law at Seattle University School of Law

'Is there a transgender Marxism? This pioneering collection shows that the answer is there are many - inspired by psychoanalysis, union organizing, queer communities, Black struggles and more. Material realities matter, tremendously, in trans lives; and trans experiences can change our thinking about both capitalism and liberation'
Raewyn Connell, author of 'Gender: In World Perspective' (Polity, 2020)