Daughters of Sparta: A Novel (Paperback) 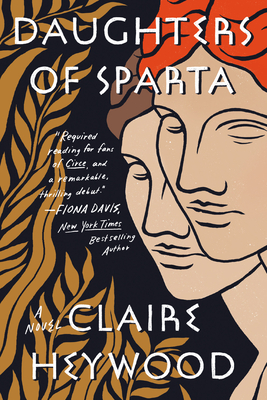 Daughters of Sparta: A Novel (Paperback)


On Our Shelves Now
THE NATIONAL BESTSELLER!
For millennia, men have told the legend of the woman whose face launched a thousand ships—but now it's time to hear her side of the story. Daughters of Sparta is a tale of secrets, love, and tragedy from the women behind mythology's most devastating war, the infamous Helen and her sister Klytemnestra.

As princesses of Sparta, Helen and Klytemnestra have known nothing but luxury and plenty. With their high birth and unrivaled beauty, they are the envy of all of Greece. But such privilege comes at a cost. While still only girls, the sisters are separated and married to foreign kings of their father's choosing—the powerful Agamemnon, and his brother Menelaos. Yet even as Queens, each is only expected to do two things: birth an heir and embody the meek, demure nature that is expected of women.

But when the weight of their husbands' neglect, cruelty, and ambition becomes too heavy to bear, Helen and Klytemnestra must push against the constraints of their society to carve new lives for themselves, and in doing so, make waves that will ripple throughout the next three thousand years.

Daughters of Sparta is a vivid and illuminating reimagining of the Siege of Troy, told through the perspectives of two women whose voices have been ignored for far too long.

“[A] gorgeous retelling of the classic Greek myth... Absolutely riveting!”
—Alka Joshi, New York Times bestselling author of The Henna Artist
Claire Heywood is a scholar of the ancient world, with a bachelor's degree in Classical Civilization and a master's degree in Ancient Visual and Material Culture from the University of Warwick. Daughters of Sparta, her first novel, was a national bestseller.

Praise for Daughters of Sparta

“Ancient myths take on new life and humanity in Daughters of Sparta, Claire Heywood's moving debut….Fans of Circe by Madeline Miller and the Avalon series by Marion Zimmer Bradley will be enthralled.”—Shelf Awareness, STARRED review

"Heywood’s wondrous retelling of the lives of two ancient princesses struggling for independence and agency in a patriarchal society resonates deeply in today’s imperfect world. Required reading for fans of Circe, and a remarkable, thrilling debut." —Fiona Davis, New York Times bestselling author of The Lions of Fifth Avenue

“Helen of Troy and her sister Klytemnestra are reimagined in this gorgeous retelling of the classic Greek myth—not as women defined by their husbands and lovers but as battle-weary survivors of a patriarchal society who take control of their own destiny. Absolutely riveting!” —Alka Joshi, New York Times bestselling author of The Henna Artist

“Claire Heywood masterfully reimagines their lives as princesses of Sparta—first as pawns in the plots and games of men, and then as powerhouses capable of standing on their own and commanding whole kingdoms. Daughters of Sparta is a fantastic rewriting of an age-old tale.” —Bitch Magazine

"Fluent and persuasive. I admire the ambition with which Heywood tackles the subject, to which she brings freshness and verve.” —Elizabeth Buchan, New York Times bestselling author of Revenge of the Middle-Aged Woman

“Heywood breathes new life into two central figures of the Greco-Roman tradition… [and] certainly achieves the feat of giving rich interiority to women who are often treated as little more than symbols.” —Kirkus

“Author Claire Heywood has written a great new historical fiction novel centered on the women known as Helen Of Troy and her sister Klytemnestra…If you’re a fan of historical fiction, this is right up your alley.” —Red Carpet Crash

“I loved this book. Accessible to those who don’t know much about Homer or Troy or Greek Mythology and special treat for those of us who do.” —The Satellite Sisters

"Amidst the backdrop of the Siege of Troy, the sisters will push against societal norms to forge a new path for themselves and future women." —Buzzfeed