M: Son of the Century: A Novel (Hardcover) 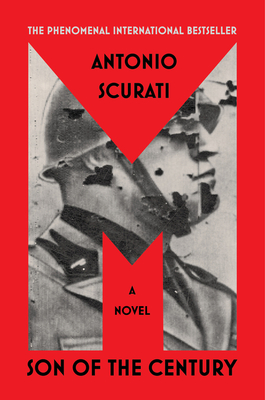 M: Son of the Century: A Novel (Hardcover)

The massive international bestseller—an epic historical novel that chronicles the birth and rise of fascism in Italy, witnessed through the eyes of its founder, the terrifyingly charismatic figure who would become one of the most notorious dictators of the twentieth century, Benito Mussolini.

It is 1919, and the Great War that has ravaged Europe is over. In Italy, the people are exhausted. Tired of the political class. Tired of vague promises, inept moderates, and the agonizing machinations of a democracy that has failed ordinary citizens.

While elite leaders have sat idly by, achieving nothing, one outsider—the director of a small opposition newspaper and a tireless political agitator—is electrifying the masses, promising hope for a demoralized nation hungry for change.

A former socialist leader ousted by his own party, he is a drifter who knows what it is to feel lost. His voice speaks for the misfits and the outcasts; he is a protector of those who are forgotten.

He is Benito Mussolini. And soon Italy—and the world—will be forever remade.

In M: Son of the Century, Antonio Scurati tells the story of fascism from within the mind of its founder, the man known to his followers as Il Duce. Steeped in historical detail and interspersed with period documents and sources, this masterful saga explores the seductive power of nationalism and idolatry, revealing how authoritarianism took hold and a nation bent to the will of one ruthless strongman. Provocative and resonant, M is a chilling reminder that the past is never gone, and that it holds urgent lessons for us today.

Antonio Scurati was born in Naples in 1969 and lives in Milan. He is a Professor of Comparative Literature and Creative writing at the IULM University in Milan and a columnist for Corriere della Sera. He is the author of various novels which have won an array of literary prizes in Italy, and M: Son of the Century is the first to be made available in English. The first in a quartet of novels about Mussolini and the rise of fascism, it was the winner of the 2019 Strega award and has been translated into forty languages.

Anne Milano Appel, PHD, has translated works by a number of leading Italian authors for a variety of US and UK publishers. Her awards include the Italian Prose in Translation Award, the John Florio Prize for Italian Translation, and the Northern California Book Award for Translation.

"Readers will find themselves swept up by the story, thrilled by its conflicts and strangely forgetful that its 'hero' is a murderous despot. It’s a dangerous lesson for a novel to convey, but a profoundly important one." — Wall Street Journal